A Sincere Thank You To The Good Folks of Ole Miss

A Sincere Thank You To The Good Folks of Ole Miss

Saying good bye and thank you to the unforgettable hosts in Oxford and the Grove. 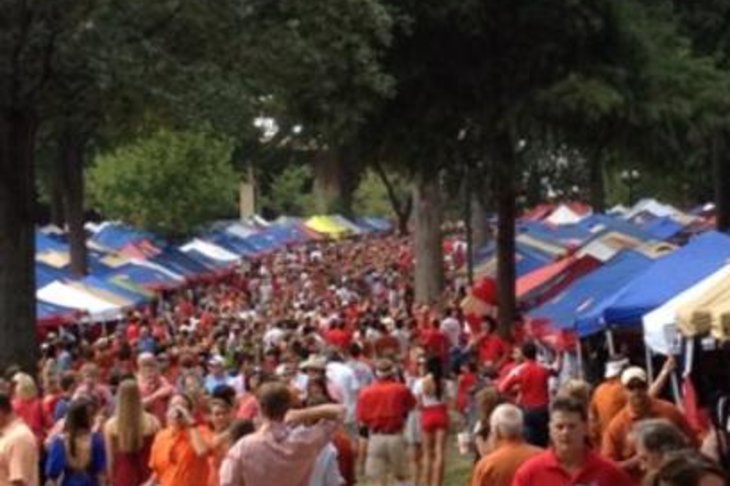 Ladies and Gentlemen, I have been to the land of Milk and Honey Boo Boo and let me assure you, all the Twainian tales of grandeur that you've heard regarding "The Grove" being the greatest tailgating experience on Earth are not only true, but probably grossly understated.

There are no words to truly do it justice, but in the interest of letting the extraordinarily hospitable folks of Ole MIss know how appreciative the Longhorns Fans are who traveled to the game this past Saturday, and give those fans who didn't have the good fortune to attend the Texas vs. Ole Miss game a glimpse, I will attempt to paint a verbal picture of what I am affectionately referring to as "The Tailgate of the Century" after the jump...
Photo courtesy P. Landry.

Having traveled to a good many college football venues all across the country and having experienced several great tailgating scenes firsthand, I feel strongly that I can offer up an enlightened perspective and say with some authority that what puts The Grove on a level all its own is the unrivaled combination of pageantry and proximity. Both ingredients essential, but the latter most likely being the competitive difference. 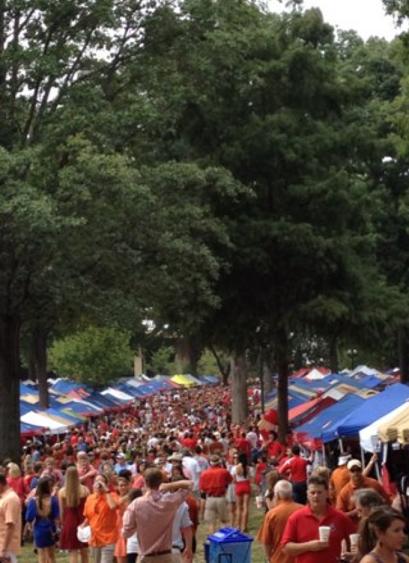 At Texas, we have some of the most elaborate tailgates going and I'd even argue that the accoutrements we bring to the party (basically creating an army of mobile sports bars) is equal if not greater in its own way to that of Ole Miss for the simple reason that grills and vehicles are not allowed in The Grove. But that's on a tailgate by tailgate basis and that's not to say that the spreads featured under Ole Miss tents are lacking in any way. Many of them are outfitted to the hilt replete with white linen covered tables featuring gourmet food kept warm in chaffing dishes under a dangling chandelier. From an overall presentation standpoint, they're on par with anything I've seen. But what really makes the difference and gives them an overall edge is that they are all together in one centralized location.

Comparatively speaking, UT's tailgates are spread out over a few square miles in various parking lots, parking garages, nooks, crannies, etc. surrounding the stadium. The Grove is 10 acres of nothing but trees and tents as far as the eye can see. It's zero-lot line tailgating and it's the close proximity that gives it a synergistic spirit of community unrivaled by any other. Imagine the parking lot at Texas with the most happening tailgating scene and magnify it by 10 or 20. That's The Grove.

And you'd think with all those people packed in there that there'd be a propensity for conflicts to arise, especially with several opposing fans practically stumbling over one another and copious amounts of booze at every turn. But everyone is free as can be to move about as they please, courtesy is an unbroken code, and the more that squeeze in, the merrier it seems to get. After a few hours, you can hardly tell where one tailgate ends and the next begins. The result is a homogeneous sea of endless cocktail parties and I don't think anyone ever met a stranger in The Grove. At least I know I didn't.

Lest we be remiss with getting too deep into the logistics and forget to mention the pageantry of it all, and that starts with the ladies of course. When they say the women are so good looking at Ole Miss that they can redshirt Miss America there, they're not wishful thinking. And it's not just that they're good looking, it's the effort and lengths they go to stick out in a cauldron of eye candy. Think social Darwinism, the All-Stars edition. Between the painted on dresses, high heels, and hair to match, just about every female mingling about is dressed like they're late for their best friend's wedding. Ensembles that would seem completely impractical and out of place at just about any other football venue in the country are basically their dress code. Their male counterparts don't go to quite those lengths, but it's definitely business casual for many and it's not uncommon to see a dapper dandy clad in a dinner jacket and a bow tie.

That said, I would imagine most Ole Miss fans would read this and say, "yes, that's called, Saturday." But even by Ole Miss standards, I doubt there's any question things got ramped up a notch or two when the Longhorns showed up this past week. Between the rumors of celebrities buying out restaurants and deep-pocketed Texas fans putting down $20 large for a place to lay their head, I'd say that was an above average Saturday in Oxford. And the Longhorns fans acquitted themselves well, particularly our female contingent who didn't miss the memo on haute couture and certainly brought their A-Game as well. It was like the Hadron Collider of Hotness and I'd imagine Oxford looked like big cherry on the weather heat index map.

With the eyeball test, I'd say we had close to 10k-plus fans on hand, more than double the number of tickets the school was allotted. I'm sure the hard hit Northern Mississippi economy got a nice lift and despite the lopsided score, I think you'd be hard pressed to find any fan that didn't have a great time. As they say in Ole Miss, "we may not win every game, but we've never lost a party." And I believe it.

On behalf of all the Longhorns fans who traveled to Ole Miss this past weekend, my sincere thanks to the Rebels and I hope we show you the same good time next year in Austin.

PS. To those of you who were there, please feel free to share your stories below. I've no doubt they were epic.