Pack a long weekend in this quirky corner of Mississippi blues country with underground juke joints, feed-an-army breakfasts and, obviously, a prize pair of fleas in wedding attire 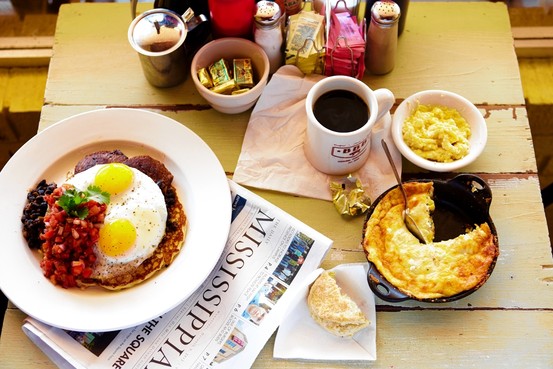 11 a.m. Sunday | Indulge in eggs and the works at Big Bad Breakfast.

IN SUN-BAKED COURTHOUSE SQUARE in Oxford, Miss. (population: 19,393), people take their time browsing the low-slung shops clustered around an imposing Greek Revival courthouse. A 10-minute stroll away is the town's other hub: the bucolic 168-year-old campus of Ole Miss, which is abuzz with events commemorating the 50th anniversary of the university's desegregation. Although named for the stately English university town, Oxford is in the middle of north Mississippi blues country. At night, people of all ages pack the bars to hear local artists and catch bands passing through en route to Austin and New Orleans. Oxford is also distinguished by its vibrant literary life. William Faulkner, an Oxford native, immortalized Lafayette County as "Yoknapatawpha County" in many of his novels. The town remains a literary hotspot: Writer John Grisham calls it home, and Richard Ford and Laura Lippman have recently floated through to read at Square Books, one of the country's best independent bookstores. A visit here wouldn't be complete without a jaunt or two into the surrounding backwoods territory for some home cooking, country dancing and local art. Though it may sound contradictory, here's our jam-packed guide to slowing down, Southern style.

7 p.m. Arrive at Memphis International Airport and drive an hour and a half to Oxford. Check into the 5 Twelve Bed and Breakfast (from $105 per night, 512 Van Buren Ave., the512oxford.com ), a six-room inn built in 1905 and wrapped with a colonnaded porch.

9 p.m. After settling in, walk five blocks to Courthouse Square and City Grocery (152 Courthouse Square, citygroceryonline.com ), housed in a 19th-century stable. Chef John Currence's haute-Southern menu changes seasonally; fall options include peaches with pickled green garlic, truffle-infused pork loin with black-eyed pea caviar and, for dessert, a balsamic ice cream sandwich with fried basil leaves. After dinner, head upstairs to the balcony for a nightcap or two. Watch Ole Miss students partying below and enjoy the music emanating from other venues on the square. 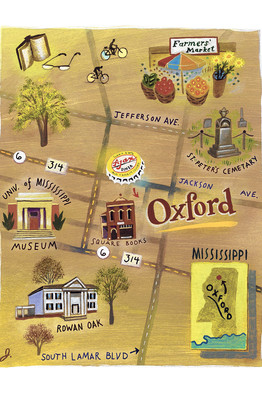 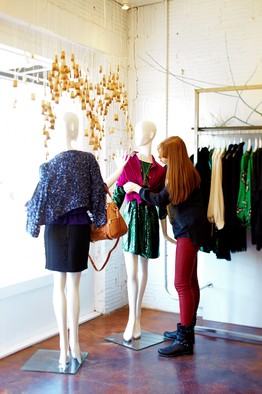 9:30 a.m. After a Southern breakfast that includes eggs, bacon, cheese grits and biscuits at the 5 Twelve, take a stroll through manicured St. Peter's Cemetery (corner of Jefferson Ave. and North 16th St.). Faulkner's grave is at the bottom of the hill just off 16th Street. Visitors have been known to leave a partly consumed bottle of whiskey as a gift.

10 a.m. Located in a parking lot, the Midtown Farmers' Market (Mid-Town Shopping Center, corner of North Lamar Blvd. and North 14th St., mtfarmersmarket.com ) isn't exactly picturesque. But with a country band playing for tips and produce—you might see carrot greens spilling out the top of the tip jar—it's a scene you won't want to miss.

Across the lot is Depot Antique Mall (709 N. Lamar Blvd., 662-236-1979), packed with fun finds from old glass bottles to vintage Ole Miss yearbooks. If you're in the mood for a true junk shop, explore the three cluttered clapboard shacks that comprise Bea's Antiques (1315 North Lamar Blvd., 662-234-9405). Scavengers and prop-masters are bound to leave happy.

11:30 a.m. Stop for a snack at the cheerful, folk-art-bedecked Bottletree Bakery (923 Van Buren Ave., 662-236-5000), which serves fresh soups, flaky scones and homemade shortbread with fresh fruit baked into the middle. Then cross the street to The Lyric Theater (1006 Van Buren Ave., thelyricoxford.com ), a former movie house that hosts prominent music acts as well as a "maker's market" in its snazzy oval lobby every other Saturday. Craftspeople sell their handiwork—jewelry made from vintage buttons, homemade dog treats and mix tapes. Amelia (901-355-0311, ameliapresents.com ), just off the lobby, is a shop named for both Amelia Earhart and Amelia Bedelia that specializes in handcrafted objects. Other stores around the square worth checking out include: Holli's Sweet Tooth (400 S. Lamar Blvd. #C, 662-236-7505), which has anything and everything for the candy lover; Mississippi Madness (141 Courthouse Square, 662-234-5280), which sells local goods; and Cicada (307 S. Lamar Blvd., shopcicada.com ), where you can find women's clothing by Rebecca Taylor, Rag & Bone and Joie. Its brother shop next door, Cicada for Him (303 S. Lamar Blvd.), is stocked with Billy Reid shoes, Vince flannel shirts and nifty socks by Hook + Albert.

1 p.m. Spend an hour in the small but fascinating University of Mississippi Museum (University Ave. and 5th St., museum.olemiss.edu ). There's a collection of ancient Roman surgical tools and an equally intriguing collection of 19th-century scientific instruments. Seymour Lawrence, a book publisher who lived in Oxford in the 1980s and '90s, left the museum his exquisite art collection, which includes works by Georgia O'Keeffe, Morris Graves and Man Ray. Make sure not to miss the small display case of oddities including two fleas dressed in full wedding regalia that must be viewed through a magnifying glass.

2 p.m. Get your country on and make the 30-minute drive down to Water Valley, which one resident called "Oxford's Williamsburg" (that would be Brooklyn, not Virginia). Once a prosperous railroad town, Water Valley fell on hard times when the train stopped coming through in the '80s. The area is now experiencing a revival as artists and academics buy up spacious old houses. There are two excellent art galleries: Bozarts Gallery (403 Main St., bozartsgallery.com ) shows work ranging from landscape paintings to carved wood tea-light holders by members of a local arts collective, and Yalo Studio (303 N. Main St., yalostudio.com ), housed in a tin-ceilinged 19th-century barber shop, shows paintings and photographs. They also sell exquisite quilts and children's dresses, sewn by co-owner Coulter Fussell out of her family scrap collection.

4 p.m. Drive along tree-lined roads to Taylor, a tiny village 20 minutes north of Water Valley. On the way, stop at Tin Pan Alley (1 Town Square Lane, Taylor, Miss., 662-281-1970), a furniture and crafts store with a rustic-chic aesthetic. Downtown Taylor is just an intersection of three county roads, at which stand a few single-story structures, including an art gallery and a catfish restaurant. Take a half-hour to wander through the airy rooms of Taylor Arts (736 CR 303, Taylor, taylorarts.com ), where you'll find vintage farming implements, expressive painted wooden fish by co-owner Christine Schultz and furniture handmade from reclaimed wood by her husband, Marc Deloach. Taylor's main attraction, Taylor Grocery (4 CR 338, Taylor, taylorgrocery.com ), does not disappoint. The walls are thick with handwritten names of past diners, and the rooms ooze conviviality. There's a live bluegrass band, the catfish is delectable and the hush puppies aren't far behind. Bear in mind: Taylor is dry, so if you think you'll fancy some beer, pick it up in advance in Oxford.

8 p.m. Drive back to Oxford for a bout of barhopping. Check the entertainment calendar in the free newspaper, the Local Voice, or just try your luck at Rooster's Blues House (114 Courthouse Square, roostersblueshouse.com ), a rambling bar with live blues every night; the cozier Proud Larry's (211 S. Lamar Blvd. proudlarrys.com ); or the Lyric Theater. If you want to fuel up, raw oysters are to be had at Irie on the Square (122 Courthouse Square, 662-259-2500), a laid-back joint with a wide selection of beers, or Snackbar (721 North Lamar Blvd., citygroceryonline.com ) , where you can wash your oysters down with their 3 Day Tent Revival, a gin-based drink with a homemade wormwood tincture. If you've danced off some of your Taylor Grocery dinner and are ready for round two, settle into this bustling tavern for chef Vishwesh Bhatt's inventive Louisiana-inflected cuisine, a cross between American comfort food and French peasant fare.

11 a.m. Your visit wouldn't be complete without an indulgent morning meal at Big Bad Breakfast (719 N. Lamar Blvd., citygroceryonline.com ), named for "Big Bad Love," a collection of short stories by Oxford writer Larry Brown. This is Breakfast with a capital B: fluffy omelets, home-smoked meats—try the Tabasco brown-sugar cured bacon—and grits you'll be thinking about for years.

1 p.m. Tour Rowan Oak, Faulkner's stately but spare house, and take a stroll in his peaceful woods. There's no such thing as a rowan oak, but Faulkner named the property, which he bought in 1930, after the rowan tree of Scotland, meant to ward against evil spirits (tax men and reporters), and the oak, which signaled strength and solitude. The interior is elegant and well preserved—Faulkner's boots are still standing by his bedroom chair. The highlight is Faulkner's writing room, where he outlined his novel "A Fable" in red grease pencil on the walls. ($5; 917 Old Taylor Rd., rowanoak.com )

3 p.m. Most stores are closed here on Sundays, but not Square Books (160 Courthouse Square, squarebooks.com ). Browse the extensive literary fiction and Southern Studies sections, buy a soda and a book and park yourself on the breezy balcony for a peaceful afternoon read.

10 p.m. Burnsides, a no-frills juke joint run by the sons of legendary north Mississippi hill country bluesman R.L. Burnside, is open until the musicians feel like quitting. Make a left out of Foxfire's driveway and follow the road until you hit Route 310. Make a left. Before the intersection with Route 7, you will see a lighted sign for Burnsides. The locals laughed at me when I asked around about a phone number or an address; a juke joint, apparently, by definition, is hard to find.

9:30 a.m. Stroll through Ole Miss's picturesque campus. At the J.D. Williams Library (1 Library Loop, olemiss.edu ), you can see first editions and letters by authors such as Katherine Anne Porter, Kurt Vonnegut and Tim O'Brien. Faulkner first editions and some of his prizes, including his 1949 Nobel medal, are also on display. If you're more musical, there's always a small selection of materials from the university's extensive Blues Archive being shown. You can also request to hear recordings. Walk-ins are welcome, although some materials are held off-site, so if you're looking for something specific, best to call in advance (662-915-7753).

11:30 a.m. Have an early lunch at the comfy Ajax Diner (118 Courthouse Square, ajaxdiner.net) on your way out of town to Holly Springs. Or if you're feeling adventurous—and carnivorous—try Betty Davis Grocery (3359 Old Oxford Rd., Waterford). This hard-to-find shack just off Route 7 is where Oxonians come on Sundays for beer and barbecue.

1 p.m. Stop off at Holly Springs. During the Civil War, the Union Army made the town its regional headquarters so, unlike many of its neighbors, it was not burned. There are plenty of antebellum houses to admire. If you call first to make an appointment, you can take a guided tour of Walter Place (300 W. Chulahoma Ave., walterplace.com ), a castle-inspired brick mansion complete with turrets, built in 1859.

4 p.m. Catch your flight home. Vow to eat a salad or two.