Tailgating Goes Above and Beyond at the University of Mississippi

Tailgating Goes Above and Beyond at the University of Mississippi 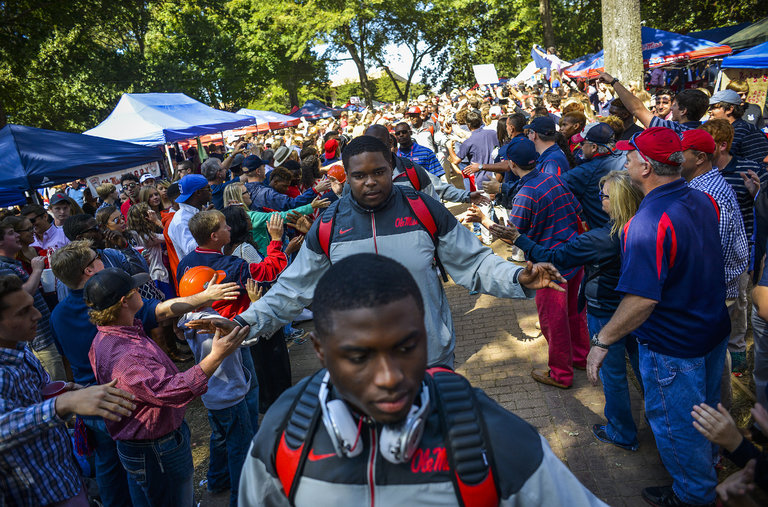 OXFORD, Miss. — Perhaps there isn’t a word for the ritualized pregame revelry on the University of Mississippi campus. “Tailgating” certainly does not do it justice. It might be a gathering of football fans before a game, but it hardly resembles those celebrated scenes in Green Bay and Kansas City, which are modest by comparison.

For one, there are the $71,000 portable toilets. And then there’s this fall’s $750,000 university budget for the quintessentially Southern marvel known as the Grove. The price tags, and the orchestration, just keep getting grander.

“We want to put on the dog here,” one fan said, using regional vernacular for “over the top.”

Rebels fans began putting on the dog in high fashion again Friday night, when an estimated 2,500 tents were erected for Saturday’s game between Mississippi, ranked seventh in The Associated Press Top 25, and Auburn, ranked fourth. To help set the stage, here is a tour of one of the country’s most elaborate pregame gatherings.

Slide Show | Tailgating Goes Above and Beyond A tour of the Grove, at the University of Mississippi, which comes alive each football weekend with one of most elaborate pregame parties.

The Grove is 10 acres of mature oak and maple trees in the center of campus. For years fans drove into the Grove to share food and drink before games. Then, in 1991, the rules were changed to prohibit vehicles. Soon, fans started walking into the area with their provisions instead, establishing the roots of the scene we see today.

The university is deeply invested in this party, which can attract more than 100,000 of its most loyal supporters and curious visitors on any given weekend. It budgeted $750,000 this year for seven home games, said Larry Sparks, the vice chancellor for administration and finance.

Before the Oct. 4 Alabama game, fans prepared a spread of food.

Yes, Hotty Toddy Potties. They are essentially classy restrooms on something like an 18-wheeler platform. The university deploys eight full-size units (the two most recent purchases cost $71,000 each; six older ones cost $50,000 each) and three Hotty Toddy Potty Jrs. It also rents 211 regular toilets and 10 handicapped-accessible toilets for game day.

There are restrictions. Rules control how alcohol is consumed and stored. For example, virtually all drinking is from red and blue cups — no beer cans or bottles. If coolers are not being watched, they must be locked to prevent minors from opening them.

Vehicles are not allowed to linger. Barbecue pits are limited. There are decibel limits on generators. Propane tanks are banned. If you try to run an extension cord from your tent to a building, a university worker will remove it.

The police would rather assist than arrest, and generally keep a respectful distance. One campus police officer compared his colleagues with the city police, saying, “We are the kinder, gentler police.”

Janna Hughes, class of 2006, sporting a sticker before the Oct. 4 Alabama game.

In many tents, food is served on silver trays, drinks splash through fountains and chandeliers hang from the metal supports. Fur coats abound. Jackets, ties and cowboy boots are common.

Prominent chefs are hired to cater meals, and chicken is a favored entree. “You don’t want to be a chicken in northern Mississippi on game day,” said Tim Walsh, the executive director of alumni affairs.

The tents themselves can be fashion statements. Some fans hire interior decorators. One tent on the Walk of Champions (the Grove’s Main Street) is painted with zebra stripes. One of its owners is Jane Foster, a converted Mississippi State fan. She brings in a rock band once a year.

“We never lose a party here at Ole Miss,” she said.

Eight others are zebra tent regulars, each paying $300 a year for setup.

At the Lyceum tent, Ty Bauer runs the show with help from his wife, Lee Ann. The tent got its name from the scale model of the Lyceum (administration building) that Bauer uses to hold and transport four TVs and liquor. The Bauers provide the liquor and the caterer. For the Alabama game, he spent $1,400 for 52 gallons of alcohol. He said he averaged $1,600 to $1,700 a game for food and liquor. Since his job involves hosting out-of-town visitors, he writes off some expenses.

Preparations for another tent, known as the Real Thing Tailgate, require a spreadsheet. Lamar Waddell handles the planning for the seven couples involved. Several hundred guests pass through the tent on any given Saturday. It recently had visitors from Italy, Holland, England, Argentina and Brazil.

Since the Grove is in the heart of the South, manners and hospitality prevail. Visiting teams’ fans are often surprised when strangers invite them into a tent for a beer or lunch. But it goes only so far.

“We have fans from every opposing team each weekend in this tent,” Waddell said before the Alabama game. “Right now there are at least four or five ’Bama fans. Here, hospitality reigns. Over there in the stadium. ...” He shook his head no and made the sign of slitting a throat.

The tents, usually 10 feet by 10 feet, pop up overnight, often erected by companies hired for the task.

Before the tents are erected, however, their owners must follow rules. The process begins with occupants claiming their tent locations Friday morning (sometimes as early as 3 a.m., depending on the opponent). Students and others hurry into the Grove to stake a claim on a site their family or employer has occupied for years.

“It’s kind of like church,” Christy Knapp, a member of the Real Thing Tent, said of Grove etiquette. “You don’t sit in someone else’s pew.”

Spot savers arrange red and blue garbage barrels to help define their area. Trees also serve as markers. The spot savers, paid $8 to $10 an hour, cannot bring in chairs; they stand, sit or recline on blankets and hold the places until the tents are set up that night.

Around nightfall on Fridays before game days, the expectation builds and the crowd grows. At 8 p.m., a siren blares and out of the dark charges a caravan — pickup trucks, trailers, golf carts, men running — all hauling tents down University Avenue in what one tent provider described as a free-for-all.

Joe Bynum runs one of the smaller tent operations, handling three locations all season and several others for Southeastern Conference games only. In his full-time job, he is an assistant road manager for the county.

One of the largest vendors is SevenSouth Tailgating. Operated by the husband-and-wife team of Jordyn and Kyle Thornton, the company erected 326 tents the night before the Alabama game in October. The six-year-old company has more than 116 season clients and about 30 more who employ them game by game. Kyle declined to discuss the company’s revenue.

The Thorntons hold preseason training so their employees know client spots and how to put up the tents.

When the university needed someone to handle its landscaping services in 2000, it turned to Jeff McManus, then with the Turnberry Isle Miami resort.

His crew has one especially large chore: cleaning up after the all-day Saturday binge, which produces dozens of tons of garbage. By 8 a.m. Sunday, the 10 acres are pristine again.

For many years, Grove cleanup started at 7 a.m. and ended at 4 or 5 p.m. Sunday, which was tough on the staff. “There was a lot of mental angst, and it weighed heavy on the crew,” McManus said.

Then the university decided to turn to local nonprofit organizations. Today, the Baptist Student Union, midshipmen from the Naval R.O.T.C. and high school baseball players are regularly on cleanup duty.

The biggest cleaning effort of the season so far came after the Alabama game. McManus said his crew arranged for 185 people to assist. “We started at 10 p.m. and finished in three hours,” he said. The total haul — 90 tons of trash — was a record, exceeding the 87 tons after the Texas game in 2012.

All this tidying does not come cheap. The cleaning bill for the 2013 season was $37,746. Annual landscape maintenance in the Grove is $53,120. But no one seems eager to show restraint. The Rebels are thriving, so the fans are happy and eager to outdo themselves at the Grove each weekend.

“The Grove for Ole Miss people is a spiritual place,” the former chancellor Robert Khayat said. “But on football game weekends, it becomes Mississippi’s No. 1 social event.”