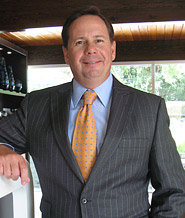 Blake Tartt III is a fifth-generation Houston-based entrepreneur with a Texas-sized love for Oxford and Ole Miss. The nationally recognized real estate strategist and investor is a 1984 Ole Miss graduate who is throwing a high-energy party on October 11th. The Powerhouse-hosted event is by invitation only for Tartt’s closest Rebel, Aggie and Oxford friends prepping for the October 12th Texas A&M game.

“I like to say I work in Houston and live in Oxford, because Oxford is much more than a town — it’s a way of life,” said Tartt who shared some great economic news during a recent exclusive interview with Hottytoddy.com. Tartt announced that a high-end fitness and cycling company he is associated with, PureRyde, would soon begin operations in a renovated studio in the Vieux Carré building on The Square.

PureRyde’s mission statement offers “a truly functional, dynamic and engaging indoor workout. Much more than just a gym, PureRyde offers a full service fitness and lifestyle studio designed to empower clients to succeed on their journey to healthy living.”

Blake Tartt III has felt empowered to love Oxford since making his first trip here in the spring of 1980 for Sigma Chi Derby Day. Tartt says he has embraced the southern charm and culture that makes Oxford unique.

“In my opinion Oxford is one of the great American towns,” he said. “I have been successful as an innovator in regional planning, executing a vision for real estate development that fuses landscaping and environmental amenities that are distinctive and high quality. Oxford has all the advantages you could desire in a growing community — great education, health care, natural resources like timber and water, and most of all, wonderful people.”

Tartt expressed his appreciation for city leadership. “Oxford really is a well-run city,” he said, adding that he is pleased to own property in his adopted hometown. “How many towns in America do you find the street-sweeping vehicles waking you up every morning? You don’t find littering, crime or bad streets. The Ole Miss campus is one of the most beautiful in America. The way Oxford and Ole Miss are cared for reflects the great pride residents and visitors have for this energetic town.”

Tartt does not hesitate to put his money where his vision is for the future — back in Oxford and Ole Miss. He is CEO of New Regional Planning in Houston, Texas and his new investment vehicle for the “New South,” NRP-Oxford. He says Starbucks and Mattress Firm are part of development plans he is working on for the former Burger King on West Jackson Avenue.

“I want to be part of projects that advance and preserve the quality of life and excellent image that Oxford holds around the country,” Tartt said. “Innovation and progress are part of that image — but so is the tradition and culture of this crossroads to Southern class, culture and cuisine.”