The Anatomy of a Field Storming: The Fantastic Saga of the Ole Miss Goalposts

The Anatomy of a Field Storming: The Fantastic Saga of the Ole Miss Goalposts 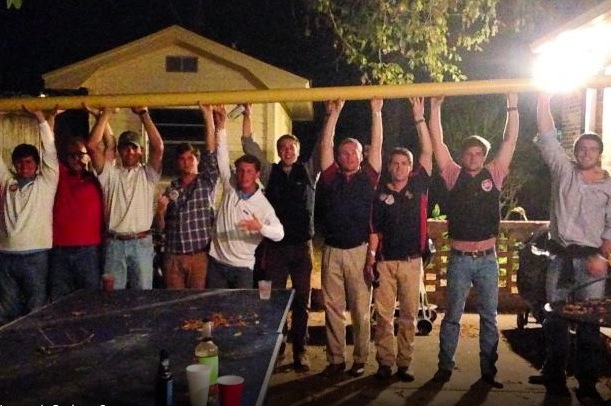 All that's left are pieces: pieces of football history and a reminder of just how beautiful this game can be. The goalposts that once stood proudly in Vaught-Hemingway Stadium are now artifacts, coffee-table fixtures following a sea of human exhilaration.

These yellow aluminum cylinders do more than simply dictate scoreboard activity. Despite their obvious visual similarities, these static symbols evoke memories. They tell time. They remind us of special days—days like October 4, 2014.

Their value is only understood by those who worship them, like a contingent of confused, hungover and euphoric Ole Miss students who stumbled upon football treasure.

Still on a whirlwind from the past 24 hours, the same group that had paraded the 20-foot piece of goalpost from Vaught-Hemingway Stadium through campus the night before edged the aluminum pillar out of tight kitchen quarters to the backyard.

It was time for the electric saw, a necessary device to ensure that one football trophy became many.

"I was expecting sparks everywhere, but it wasn't too intense," Ole Miss student Buckner Corso said. "I'd say we worked on the post for two hours or so. We were able to figure it out." 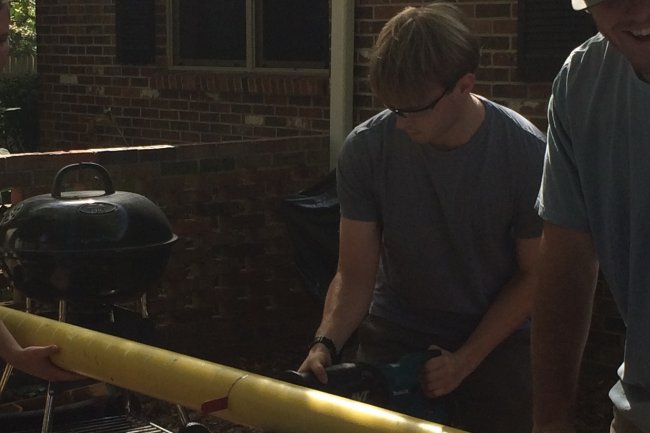 To non-college football fans, the process of sawing a goalpost into 30 small pieces might seem barbaric and bizarre. To those who have felt the sweeping emotion that comes with program-altering victories—the kind of games that live on through generations—this unfamiliar scene hits closer to home.

For Corso, a 23-year-old grad student from Jackson, Mississippi, the goalpost voyage stretches further back than the Rebels' 23-17 victory over Alabama. It goes back to September 4, 2010, the day Ole Miss lost to Jacksonville State 49-48 in double overtime.

"That was my first game as a student," Buckner recalled of that crushing loss. "I've seen the lows and one of the biggest highs we've ever had since I've been here."

But Saturday began like any other game day, only the intensity was amplified and the campus was over capacity. Before entering the stadium, Buckner enjoyed the sights and sounds of The Grove, an unduplicatable pre-football venue. Just like always.

About an hour and 45 minutes before the game began, he took his seat in the stadium about halfway up the student section. As anticipation mounted, the Ole Miss fans waited with bated breath.

What happened next you already know. Alabama took a convincing 14-3 lead to halftime. Following the intermission, Ole Miss responded by outscoring the Crimson Tide 20-3 in the second half behind an active defense and the brilliance of quarterback Bo Wallace.

With less than a minute remaining, an interception by cornerback Senquez Golson in the back end zone secured the victory. Referees originally ruled the catch incomplete, although they reversed the call upon review. Ole Miss took a knee as the stadium bubbled over. Once the clock hit zeroes across, the stands could no longer contain the crowd.

Fans charged. They hugged. They kissed. 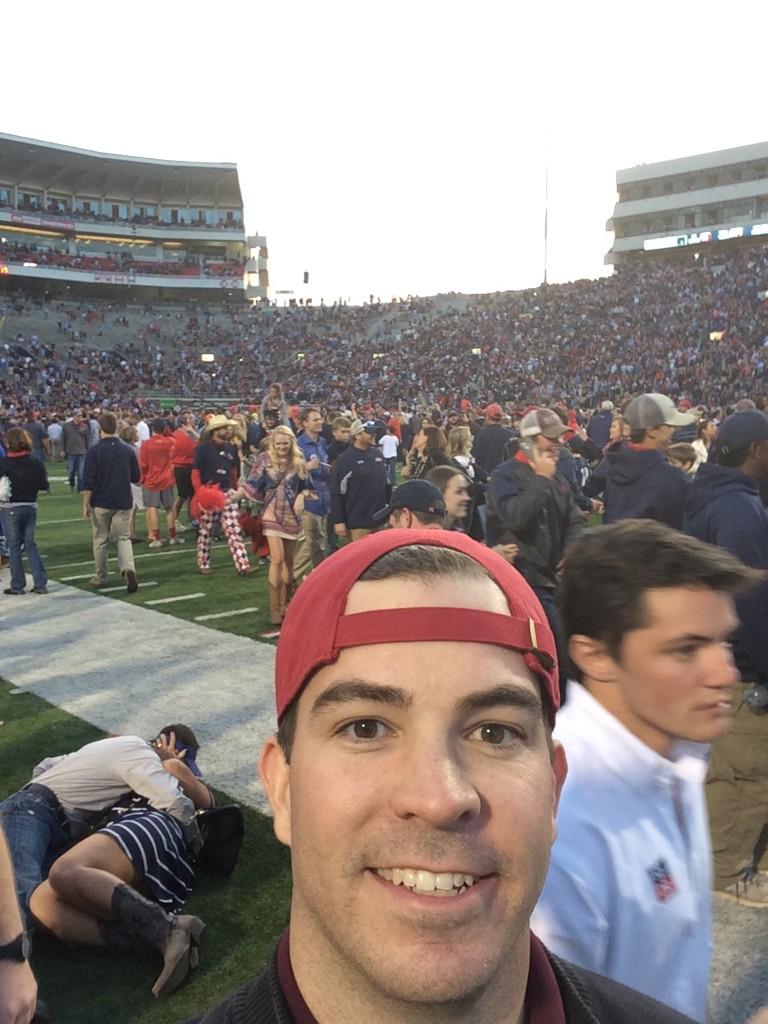 "I did not jump on the goalposts, and I wasn't involved in tearing it down or anything," Corso said. "We were too busy getting pictures with the players."

Following the celebration in the stadium, Corso did not help escort the goalpost out of the building. Instead he went back to his tent and tried to process the entirety of what just transpired. He sat in his chair and smiled.

As he did, however, a friend alerted him that a group had obtained a significant piece of one of the posts near where ESPN's College GameDay set had been located. He jumped at the opportunity to help out, as did roughly 19 other friends.

That's when the voyage truly began. 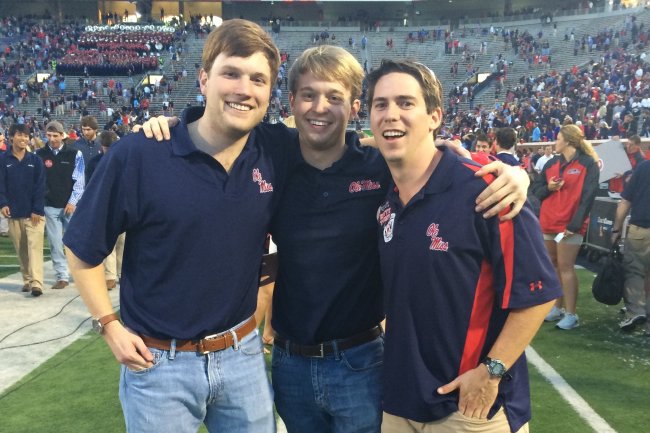 Imagine the scene: roughly 20 or so college students navigating traffic, jubilantly carrying a sacred piece of Ole Miss memorabilia on their shoulders as the masses migrated through The Grove. It was frenzy, and the response was overwhelming.

They kept walking. With the goalpost resting overhead, they headed to The Square, one of Oxford's most popular destinations. As day became night, the group paraded the goalpost past the bars as more applause, more chants and more cheers broke out. This was a celebration, a reminder of what had just taken place.

Slowly but surely, as the walk progressed, the group started to lose steam. The emotional and physical drain set in. Some wanted to take it around The Square once more for another victory lap. Others, including Corso, were out of gas.

"This thing was starting to get pretty heavy," Corso said. "I bet altogether we walked about a mile and a half."

As the pace began to slow, the group brought the piece of goalpost to the house Corso is currently renting. They were greeted with a fascinating dilemma.

How do you fit a 20-foot-long piece of goalpost into your home? Where do you put it?

The answer, of course, was the kitchen. And it was a tight squeeze. After angling it through the house, the group managed to find just the right amount of space before the crowd started to disperse to celebrate further in various locations. Having maximized the day and then some, Corso decided to avoid the run to the bars. 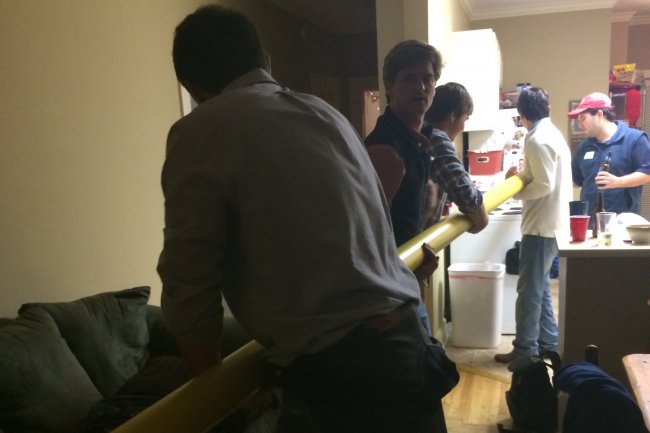 Instead, with the goalpost at their feet, he and a few friends enjoyed a beverage and put on a replay of the game. They looked for the things they missed and soaked in the environment from an entirely different perspective, all with a critical piece of the day by their side.

"That's when it started to blow up," Corso said.

With one tweet, their yellow treasure went viral. Corso, in search of some mild social media fame (by his own admission), posted a picture of the goalpost in his home. The result was an unexpected frenzy. 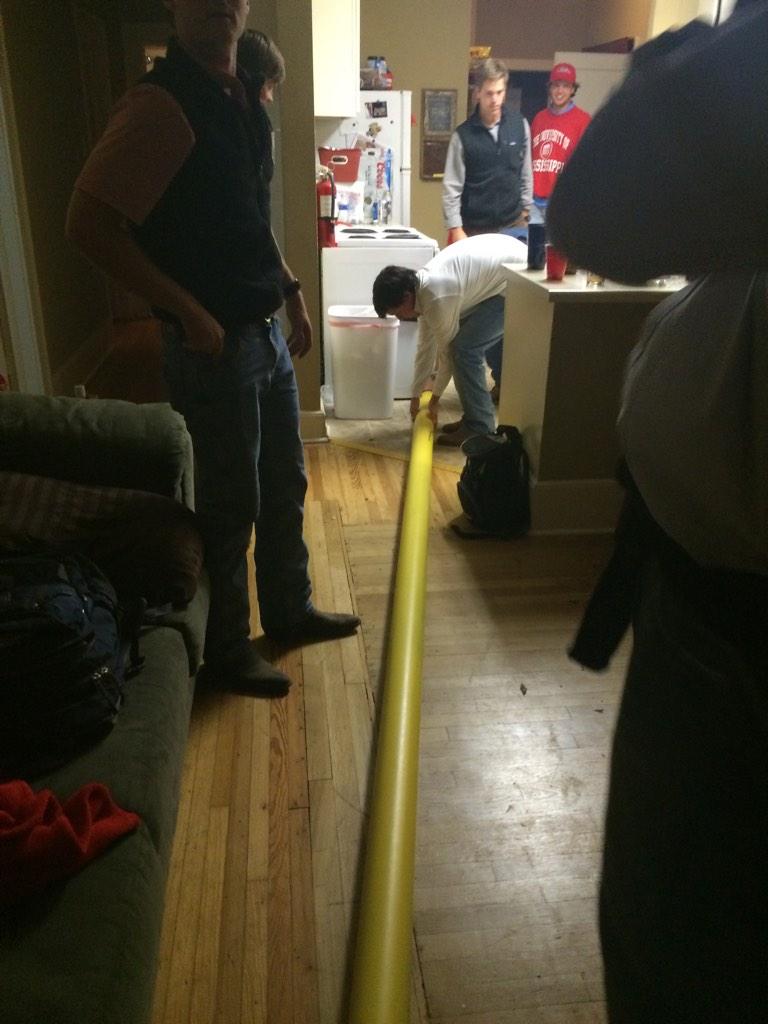 As the tweet circulated and word spread, the Ole Miss masses showed up at his door demanding to see the sacred relic. A low-key night transformed into madness.

"I got nervous when I eventually went to sleep," Corso said. "I thought someone might break into my house."

The social media fame also generated an unexpected response. Ross Bjork, the Ole Miss athletic director, reached out to Corso in hopes that he could claim dibs on a small portion of the item.

These too made their rounds.

The next day, Corso and crew woke up to a mess. The house was nothing short of a disaster, while the status of each individual varied greatly. To put it plainly, it was a double-down-on-Vitamin-Waters kind of morning for the moving crew and the entire state of Mississippi. But their journey was not yet complete.

From its hallowed place in the kitchen, the goalpost was relocated to the backyard as a friend returned with a saw. Despite offers from the school's AD, the team matter-of-factly disassembled the holy object it had so proudly carried around roughly 12 hours earlier.

Piece by piece, the goalpost shrunk. Ultimately, the once 20-foot column metamorphosed into roughly 30 small pieces. They were then handed out with care.

"I have had a million people ask me for a piece of it," Corso said. "We gave it to everyone who helped carry it." 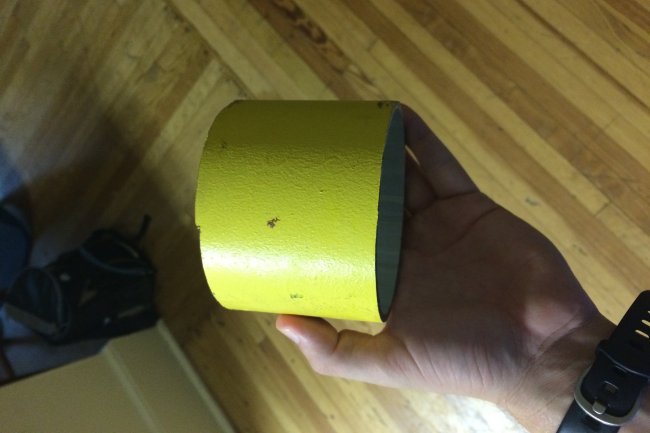 Having coordinated with Bjork the night before, Corso took two pieces of the goalpost to Ole Miss headquarters. His visit, however, was much more than a simple drop-off. He sat down with Bjork, and the two talked about the day that was, the goalposts and, more importantly, the state of the program.

While Bjork was grateful for the gesture and thrilled by the enthusiasm it revealed, he also relayed a message regarding fan behavior going forward.

"He told me that these are the types of wins we're going to expect rather than celebrate," Corso said on the exchange with Bjork. "When they happen, we'll be happy. But we don't have to rush the field anymore."

With the bill in the open and pricey goalposts to replace, Bjork posted the following message on his Twitter account. 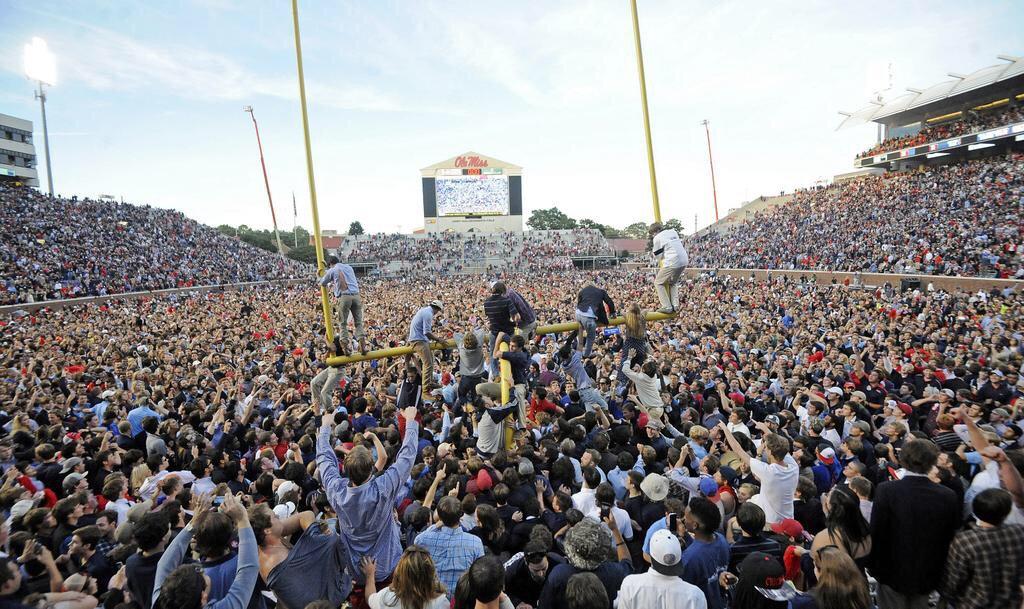 The school's announcement that it was accepting donations, like the celebration itself, soon went viral.

All $5 donors will receive thank-you letters. A $25 donation will get you a desktop background for your computer. A $250 donation is good for a commemorative photo. And for $500 or a $1,000 donation, the school offered 80 small pieces of an 18-foot piece of goalpost that it recovered. Those 80 artifacts were gobbled up almost instantaneously.

Within hours of posting, Ole Miss easily surpassed its $75,000 donation goal. As of Wednesday afternoon, more than $100,000 had been raised.

Corso's donation was far more meaningful than a dollar amount, something he's well aware of himself. Although he could still get a pretty penny from a buyer for his piece of history, it's not for sale.

"I'm going to get it inscribed and framed," Corso said. "I'm also going to put together everything in a scrapbook. For me, this is a culmination of being a Rebels fan."

All tents have since been tucked away; the field has been cleared. Fans have retreated to their homes, awaiting the next chapter of Ole Miss Football. College GameDay has long departed, off to its next Mississippi destination.

The goalposts that hovered over the Vaught-Hemingway field are no more, but they are not lost. The remains have simply been scattered throughout the state, ready to tell a story when it needs to be told.